Today I wanted to discuss the geometry of curves and surfaces.

First let us consider a curve r(s) which is parameterised by s, the arc length.

is a unit tangent vector and so t2 = 1, thus t.t = 1. If we differentiate this, we get that t.t‘ = 0, which specifies a direction normal to the curve, provided t‘ is not equal to zero. This is because if the dot product of two vectors is zero, then those two vectors are perpendicular to each other.

Let us define t’ = Kn where the unit vector n(s) is called the principal normal and K(s) is called the curvature. Note that we can always make K positive by choosing an appropriate direction for n.

Another interesting quantity is the radius of curvature, a, which is given by

Now that we have n and t we can define a new vector b = t x n, which is orthonormal to both t and n. This is called the binormal. Using this, we can then examine the torsion of the curve, which is given by

are the principal curvatures. Then

is called the Gaussian curvature.

Gauss’ Theorema Egregium (which literally translates to ‘Remarkable Theorem’!) says that K is intrinsic to the surface. This means that it can be expressed in terms of lengths, angles, etc. which are measured entirely on the surface!

For example, consider a geodesic triangle on a surface S.

Let θ1, θ2, θ3 be the interior angles. Then the Gauss-Bonnet theorem tells us that

which generalises the angle sum of a triangle to curved space.

Let us check this when S is a sphere of radius a, for which the geodesics are great circles. We can see that

Since K is constant over S,

A Brachistochrone Curve is the curve that would carry a bead from rest along the curve, without friction, under constant gravity, to an end point in the shortest amount of time.

The Brachistochrone problem was one of the earliest problems posed in calculus of variations. The solution, which is a segment of a cycloid, was found individually by Leibniz, L’Hospital, Newton and both the Bernoulli’s.

The following solutions are taken from wikipedia.

Johann Bernoulli used Fermat’s principle that “the actual path between two points taken by a beam of light is the one which is traversed in the least time” in order to derive the brachistochrone curve. He did this by considering the path that a beam of light would take in a medium where the speed of light increases due to a constant vertical acceleration equal to g.

Due to the conservation of energy,

, where y is the vertical distance. Furthermore, the law of refraction gives us a constant (vm) of the motion for a beam of light in a medium of variable density:

Rearranging this gives us

which can be manipulated to give

If we assume that the beam, with coordinates (x,y) departs from the origin and reaches a maximum speed after falling a vertical distance D:

we can rearrange the equation to give us the following:

which is the differential equation of an inverted cycloid generated by a circle of diameter D, as required. 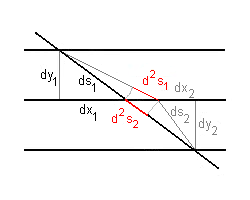 The horizontal separation between paths along the central line is d2x.

For the path of the least time, these times are equal hence their difference is equal to zero.

Consequently, the condition for the least time is

Although mathematics is often considered a ‘bland’ subject, (I, however, completely disagree with this!), throughout the years there have been many scandals. Here are my top 5 mathematics scandals!

n of the mathematical geniuses of the 20th century, working in the areas of cryptology and computer science. In World War II, he worked at Bletchley Park and played a major role in breaking the German codes.

However, he was a homosexual, and at that time this was illegal in Great Britain. After being charged in 1952, he pleaded guilty and as a consequence was stripped of his security clearance and put under hormone treatments. He became deeply unhappy and, sadly, Turing committed suicide by poison apple just two years later at the age of 41.

The British government only officially pardoned him for “the appalling way he was treated” in 2013.

onally unfamiliar with this story, but it’s pretty shocking so I’d thought I’d share it with you!

Bloch was a French mathematician, who was active for 31 years and is best known for his contributions to complex analysis. However, he spent all these 31 years in a mental institute. Why? In 1917, when he was on leave from World War I, he killed his brother, his aunt and his uncle. He told one of his mathematician colleagues that he committed these murders as an act to rid his family line of people afflicted with mental illness. Crazy right!

This story is a classic.

Most of you know ‘calculus’ – we all studied it at some point in secondary school. It is the study of the infinite and infinitesimal and is one of the most amazing tools offered to a student in mathematics. Well, Isaac Newton and Gottfired Leibniz strongly disagreed on who deserved credit for its discovery – they both wanted full credit! The war between Newton and Leibniz was ugly and they battled it out via the letters and journals of the day, each accusing the other of plagiarism. The funny thing is historical documents now seem to reveal that both men made their discoveries independently and nearly simultaneously – they both deserved credit!

Burning of the Library of Alexandria

This library, which was built around the 3rd century BC, was the house of many academic wonders, including a wealth of discoveries in mathematics. In this library were the works of Euclid, Archimedes, Eratosthenes, Hipparchus and many other notable mathematicians. Although, there aren’t many details of the fire, it’s clear that the destruction of the library was a major setback to academics of the time.

Hippasus was part of the Pythagorean society (the people who discovered the infamous theory about right angled triangles: a2+b2=c2). The Pythagorean society is known for their secrecy and, in the 5th century, when Hippasus managed to prove that the square root of 2 was irrational, it is said that he was going to reveal this to the public at large, and so the society drowned him at sea. However, there are some questions about the details of the legend of Hippasus – don’t take this to be fact!

And now for a false scandal: The Nobel Prize