Pascal’s triangle is filled with a wealth of interesting patterns, something I never learnt during secondary school when first introduced to this mathematical object. In this post, inspired by a Numberphile video, I want to show you some of these patterns that you might have never seen before.

Firstly, what is Pascal’s Triangle?

Pascal’s triangle is a triangular array of the binomial coefficients.

To construct Pascal’s triangle, start with the two top rows, which are 1 and 1 1. To find any number in the next row, add the two numbers above it.

At the beginning and end of each row, where there is only one number above, write 1.

Pascal’s triangle is symmetric, a fact which follows directly from the formula for the binomial coefficient:

It can also be seen by how the triangle is constructed, i.e. “by the interpretation of the entries as the number of ways to get from the top to a given spot in the triangle“.

This fact can be proved by induction. The main point of the argument is that each entry in row n is added to two entries below. This gives us:

In Pascal’s words: “In every arithmetical triangle each cell is equal to the sum of all the cells of the preceding row from its column to the first, inclusive”. This is easier to explain using a diagram:

Mathematically, this can be proved by induction and is denoted in the following way:

To see this, let us first rearrange Pascal’s triangle.

The successive Fibonacci numbers are the sums of the entries on the marked diagonals:

Recently, the Harlan brothers highlighted that e is hidden in Pascal’s triangle. This was discovered by considering products rather than sums.

Denoting Sn as the product of the terms in the nth row, as n tends to infinity, we find that:

Catalan numbers can be found in Pascal’s triangle in a few ways, for example:

There are many more patterns, and I encourage you to find out more about them! M x

The Ulam Spiral, discovered in 1963 by Stanislaw Ulam, is a graphical depiction of the set of prime numbers.

If you were to arrange the positive numbers in a spiral, starting with one at the centre, then circle all of the prime numbers, what would you get? As prime numbers don’t have a predictive structure, you would expect to get little or even nothing out of arranging the primes this way. But, Ulam discovered something incredible:

To his surprise, the circled numbers tended to line up along diagonal lines. In the 200×200 Ulam spiral shown above, diagonal lines are clearly visible, confirming the pattern. Although less prominent, horizontal and vertical lines can also be seen.

Even more amazing, this pattern still appears even if we don’t start with 1 at the centre!

There are many patterns on this plot. One of the simplest ones is that there are many integer constants b and c such that the function:

generates, a number of primes that is large by comparison with the proportion of primes among numbers of similar magnitude, as n counts up {1, 2, 3, …}.

Ernst Chladni was a German physicist who is sometimes labelled as the ‘father of acoustics‘. His work in this area includes research on vibrating plates and the calculation of the speed of sound for different gases.

One of Chladni’s greatest achievements was his invention of a technique to show the various methods of vibration of a rigid surface, such as a plate, which he detailed  in his book Entdeckungen über die Theorie des Klanges (“Discoveries in the Theory of Sound”) in 1787. His technique entailed:

“drawing a bow over a piece of metal whose surface was lightly covered with sand. The plate was bowed until it reached resonance, when the vibration causes the sand to move and concentrate along the nodal lines where the surface is still, outlining the nodal lines.”

The patterns that emerge are beautiful and are now known as Chladni figures, although Chladni was building on experiments and observations by Robert Hooke in 1680 on vibrating glass plates.

Chladni’s discovery was extremely important as it inspired many of the acoustic researchers who later extended his work.

Once these patterns were well understood, they began to have many practical uses, for example violin makers use “Chladni figures to provide feedback as they shape the critical front and back plates of the instrument’s resonance box“.

Although I had another blog post planned for today (also about primes surprisingly!), I read about an exciting new discovery on prime numbers in the news, and thought I’d write a quick blog post about it.

However, the mathematicians made a discovery while performing a randomness check on the first 400 billion primes: prime numbers tend to avoid having the same number as their predecessor. In fact, it was found that:

Although this isn’t necessarily a pattern, it does hint at the fact that the sequence of prime numbers isn’t completely random, something that mathematicians have taken to be true for many years. Ken Ono told Quanta Magazine:

“I was floored. I have to rethink how I teach my class in analytic number theory now.”

The two mathematicians suggest that the pattern they’ve discovered could be explained by the k-tuple conjecture, which predicts how groupings of primes will appear. Although this may not help in other prime related problems such as the twin-prime conjecture or the Riemann hypothesis, and may in fact have no implications to maths or number theory, Andrew Granville told the New Scientist:

“It gives us more of an understanding, every little bit helps. If what you take for granted is wrong, that makes you rethink some other things you know.”

What do you think about the news? M x

A fractal is a never-ending pattern that repeats itself at different scales and is created by a simple process that repeats continuously.

Romanesco Broccoli is an example of the ‘ultimate’ fractal vegetable. Its pattern represents the golden spiral.

The golden spiral is a logarithmic spiral where every turn is farther from the origin by a factor of the golden ratio (phi).

Ammonites have been extinct for 65 million years and were predatory, squid-like creatures that lived inside coil-shaped shells. The walls between the chambers inside their spiral shells were complex fractal curves. Similarly to the romanesco broccoli, the shells of ammonites also grow as a logarithmic spiral. 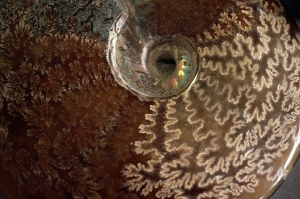 Mountains are formed from tectonic forces that push the crust upwards, joined with erosion, which breaks some of the crust down, resulting in a fractal pattern. 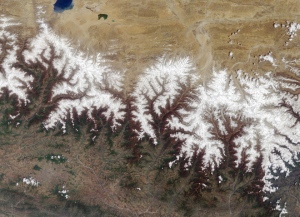 Fractal patterns are also present in many plants, as they generate their branching shapes and leaf patterns through simple recursive formulas.

When water crystallises it forms repeating patterns in snowflakes or on frosty surfaces.

These patterns inspired the first described fractal curves – the Koch snowflake – in a 1904 paper by Swedish mathematician Helge von Koch.

Finally, the path that lightning takes is formed step by step as it moves towards the ground and closely resembles a fractal pattern. 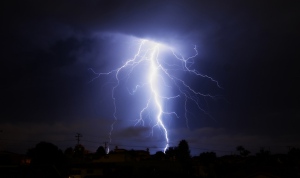 Mathematical fractals are formed by calculating a simple equation thousands of times, feeding the answer back to the start. The mathematical beauty of fractals is that infinite complexity – meaning we can zoom into them forever – is formed from relatively simple equations.

A very famous example of a mathematical fractal is the Mandelbrot Set, which was discovered by Benoit Mandelbrot in 1980.

The Mandelbrot set is a collection of numbers that are generated from the recurrence equation:

Firstly we specify an initial value of z and c (a constant). We are looking for starting values of z, for which the sequence of numbers generated by the equation remains bounded. For example, if we start with z = -1 and c = 0, then the values will always be 1 or -1, so the sequence is bounded. Hence, -1 is included in our set of solutions.

When extending this to use complex numbers, the results become very interesting; we get the Mandelbrot Set:

In this picture, the black indicates numbers in the set, blue are numbers not in the set, and white is the boundary.

For more information, I suggest clicking here or here.

Additionally, Fractals are closely related to Chaos Theory (as they are complex systems that have definite properties) which is a subset of and area in mathematics called Dynamical Systems. These allow us to determine the general behaviour of solutions to systems of equations without actually solving the equations.

Let me know what you think of fractals! x